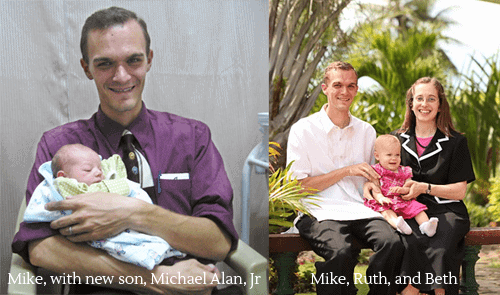 I love the the Bible  verse “There is no greater joy than to hear that my children walk in truth. ” I have to agree, but want to also say  that there is  no greater joy than to hear that God is using my children! Below is a story from the newsletter that my son Mike, and his wife Ruth, just sent out. They are missionaries in the Phillipines, and this is just one of the many awesome stories we have heard  about how God is blessing their ministry, and using them there. It’s a thrill as a parent to watch God work in their lives, and hear of the many they are reaching with the Gospel. You will love this story!

“On Thursday afternoon, September 20, right in the middle of our 2nd annual missions conference, I had what was probably the most unusual soul-winning experience of my life. I was working in the church library when I heard a scuffle out in the driveway. I walked over to the door and saw one of our Filipino staff members, Levi Espada, wrestling with a boy who appeared to be about sixteen or seventeen years old. I immediately recognized the boy to be a “scrapper,” someone who makes his living by collecting items to be recycled. “Scrappers” are a very common sight anywhere in the Philippines, and their reputation is less than respectable. Most of them are teenagers, but some are children. Leading up to this event, we had previously had several incidents of “scrappers” trying to steal items on church property. Levi subdued the boy and took him around behind the church. I walked outside, and when I looked in the boy’s bag, I found the battery used for starting the church generator. The boy had broken into our generator shed in broad daylight and stolen the battery. I contacted Pastor DeMoville, and we concluded that we needed to call the police to report the situation. The boy, who goes by the name John John, turned out to be sixteen years old. He was terrified and begged me not to call the police, promising that he would change his ways. I told him I was sorry, but I had no choice. I entered the number into my phone and prepared to call, but as soon as John John realized that I wasn’t going to change my mind, he jumped to his feet and ran like his life depended on it. There was no time to think. I took two strides after him and dove with everything I had. Wrapping my arms around him, I pinned his arms to his sides and drove him to the ground. Bro. Levi quickly helped me get him back under control; and to prevent him from running again, we took him over to our shed and made him sit inside with Levi standing in the open doorway. I called the police and then walked back over to where John John was squatting on the floor of the shed. I gave him a stool to sit on and sat down next to him. I put my arm around his shoulders and talked to him softly. By this time the neighbors had heard the commotion and were coming over to stare at the ashamed boy. I chased them all away and took John John inside our library. I tried to witness to him, but he was too scared to concentrate. When the police arrived, I informed them that we weren’t going to press charges, but I did want to meet the boy’s family. After dealing with the paperwork, the police officers took John John home in the police truck, and I followed on my motorcycle. John John lives with his grandma and a couple of his aunts. The police talked to John John’s aunts and then left. I stayed behind and had the privilege of giving the Gospel to John John and two of his aunts. John John, the boy who I had just tackled an hour before, bowed his head with his two aunts and trusted Christ. He went soul winning with me two days later and fearlessly passed out tracts. He came to church on Sunday morning and got baptized. Since that day, John John hasn’t missed a single Sunday morning service and has brought six different “scrapper” friends with him, five of whom have been saved and three of whom have been baptized. It’s amazing what the love of Christ can do!”