Are you raising a rebel, thinking that it is just the normal thing?

The worldly “experts” believe that it is natural for kids to rebel, resist their parents’ authority, and be uncontrolled. For example, they observe rebellion in 2 year olds, and assume that it is normal and expected that all kids will go through the “terrible twos”. When the child is still showing defiance at age 3, parents are told that it’s just another phase, the “terrible threes.” And of course, everyone warns parents about the teen years, and that we should just expect disrespect and rebellious attitudes. 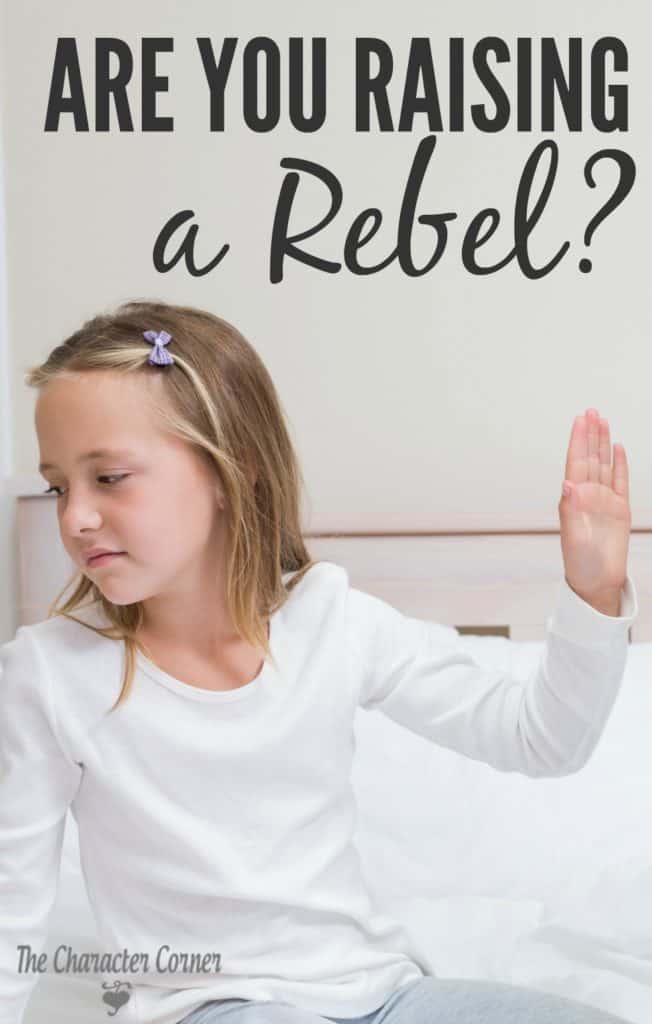 Unfortunately, many Christian parents listen to these “experts”, and believe that these phases and disrespect are normal and to be expected. They are normal in the sense that our kids are born with a sinful nature. That doesn’t mean we have to allow it though!

God commands children to honor and obey their parents, and He doesn’t require things that aren’t possible.  It IS possible to have kids that honor and obey you.

I believe there are two reasons though that we are missing it in a lot of homes:

It takes WORK to train kids to be obedient, respectful, and honoring to their parents. God commands us to nurture and train our children, so it’s up to US! God has placed us, the parents, as the authority in our homes.

What exactly is rebellion? Very simply stated, rebellion is the rejection of authority. It has two parts: external and internal. External rebellion is obvious disobedience.  For example, you tell your child to pick up his toys, and he responds by saying ‘NO!” Internal rebellion isn’t as easy to see, as it’s more of a stubborn attitude that doesn’t want to submit to authority, due to pride.

Obeying is doing what you’re told with a happy heart. Absence of the happy spirit is what we call PASSIVE REBELLION.

The classic example of passive rebellion is the story of the little boy who was misbehaving. His dad told him to sit on the chair in the corner. The little boy stomped over, sat down, and defiantly crossed his arms. Then he said, “Dad, I may be sitting down on the outside, but on the inside I’m standing up!”

Most kids are smart enough to avoid the external, obvious rebellion, so they are subtle. Some signs of passive rebellion are: doing things their own way rather then how they were told, poking, whining, pouting, arguing, complaining, sighing, rolling eyes, and pulling away. These all show signs of resentment to your authority.

Sometimes parents are so shocked when their “compliant, good child” gets into trouble as a teen, and starts showing signs of rebellion. The truth is that teenage rebellion doesn’t start at age 13. It starts much earlier, in a young child’s heart, often in the form of passive rebellion.  Left unchecked, it grows and begins to manifest itself in their teen years.

Focusing on just the outward actions  when kids are young, rather than training the heart, sets us on the path to raising a rebellion.

Is your parenting leading your kids to rebellion? Join me for a free 5-day series!

(In my next post, I will share WHY it is so important to deal with passive rebellion.)