Training your children in character is an ongoing process so it is very important to commit to building Godly character over time, rather than expecting to train them in character once and be done.

Probably one of the biggest causes of discouragement for me during the early parenting years was not seeing instant change in my children. I was working hard to teach them God’s Word, and to train them in character, but it seemed they really didn’t have any character to speak of! 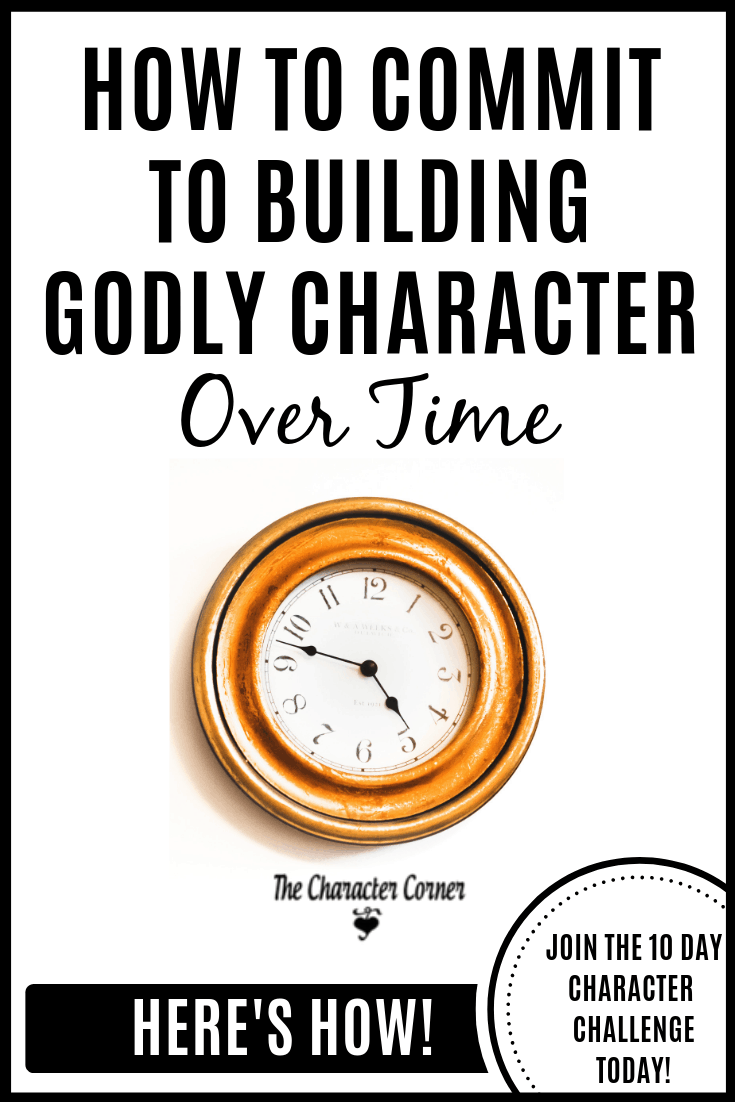 Character training  takes time and a lot of repetition day after day, and year after year. That’s one of the reasons that God gave us our children for at least 18 years! We need that long to help them develop and grow in Godly character.

Keep in mind that you probably won’t see huge results immediately, and may  not even see little results as quickly as you’d like to.

The key is to be faithful in planting daily seeds of character, and leaving the results to God.

I often got discouraged when I didn’t see the results that I was hoping to because I expected them to change after just a lesson or two.

Then God reminded me of how often I still struggle with certain character traits, and that it often takes me awhile to get victory in some of those areas.

This helped me to recognize that it wasn’t fair of me to just expect my kids to overcome their struggles and change just right after we’ve had a few character lessons about it. I needed to be patient with them just as God is patient with me!

More than likely you will see spurts of character growth in your children mixed with days where they seem to have absolutely NO Godly character!  You may have spells where you aren’t really seeing as much fruit as you’d like to see for your efforts.

Some of my kids were actually young adults before I really started to see the fruit of all my teaching and training, and realized that it really HAD stuck.

Sometimes you may feel like your character training isn’t working. At those times it is all the more important to simply commit to building Godly character over time, and stop looking for the instant results.

Remember these two thoughts when it doesn’t seem like character training is working:

1. You can teach and train your children in Godly character, but you cannot FORCE them to choose it.

Your kids have to choose daily to show good character, or give in to their sinful nature and the negative character traits that brings.

Your job is to teach and train them in His Word as God tells you to. Therefore your goal should be to remain faithful in that training so you can stand before God and say you were faithful and did your best.

Claim the promise in Isaiah 55:11 that tells us that God’s Word WILL prosper and accomplish what it is meant to do, and it will NOT return unto Him void.

So if you stay faithful in planting God’s Word in the hearts and minds of your children, His Word will do what it is meant to do. It will bring conviction, as well as the fruit of Godly character.

The next time you are discouraged when you see those character flaws in your children, remind yourself that Godly character doesn’t happen overnight, and determine to remain faithful!

1. Write Isaiah 55:11 out on a card and post it in a visible spot where you will see it often, and be reminded that God’s Word won’t return unto Him void.
2. Write a prayer of commitment to  God promising to remain faithful in pointing your kids to God’s Word daily and training them in Godly character.

Did you miss the other posts in the challenge? Sign up here and get them delivered straight to your inbox each day!

Thank you to our sponsor Carole P Roman and the Captain No Beard Series! Join him as he sets sail on 10 separate voyages of imagination with his fearless crew aboard his pirate ship, The Flying Dragon. The Captain No Beard series tackles imaginary play, bullying, stranger danger, peer pressure and more. ARRRGGH!