Through the ups and downs of parenting our eight kids, I would often get discouraged with one (or all) of the kids, because their behavior showed a lack of character. It seemed that despite all my efforts, my character training wasn’t working!

Many times when going to a conference to speak on ‘Character Training’,  I would tell my husband that I had no right to speak on the topic because our kids had no character! It seemed that some days the kids behaved pretty well, and I thought maybe they were developing some character. But then we’d have some of those other days — when they were bad, they were very bad!

So how do you teach good character? Does that mean that all the character training and teaching I had been doing wasn’t really working? No, it just means that they are humans with a sinful nature and free will. 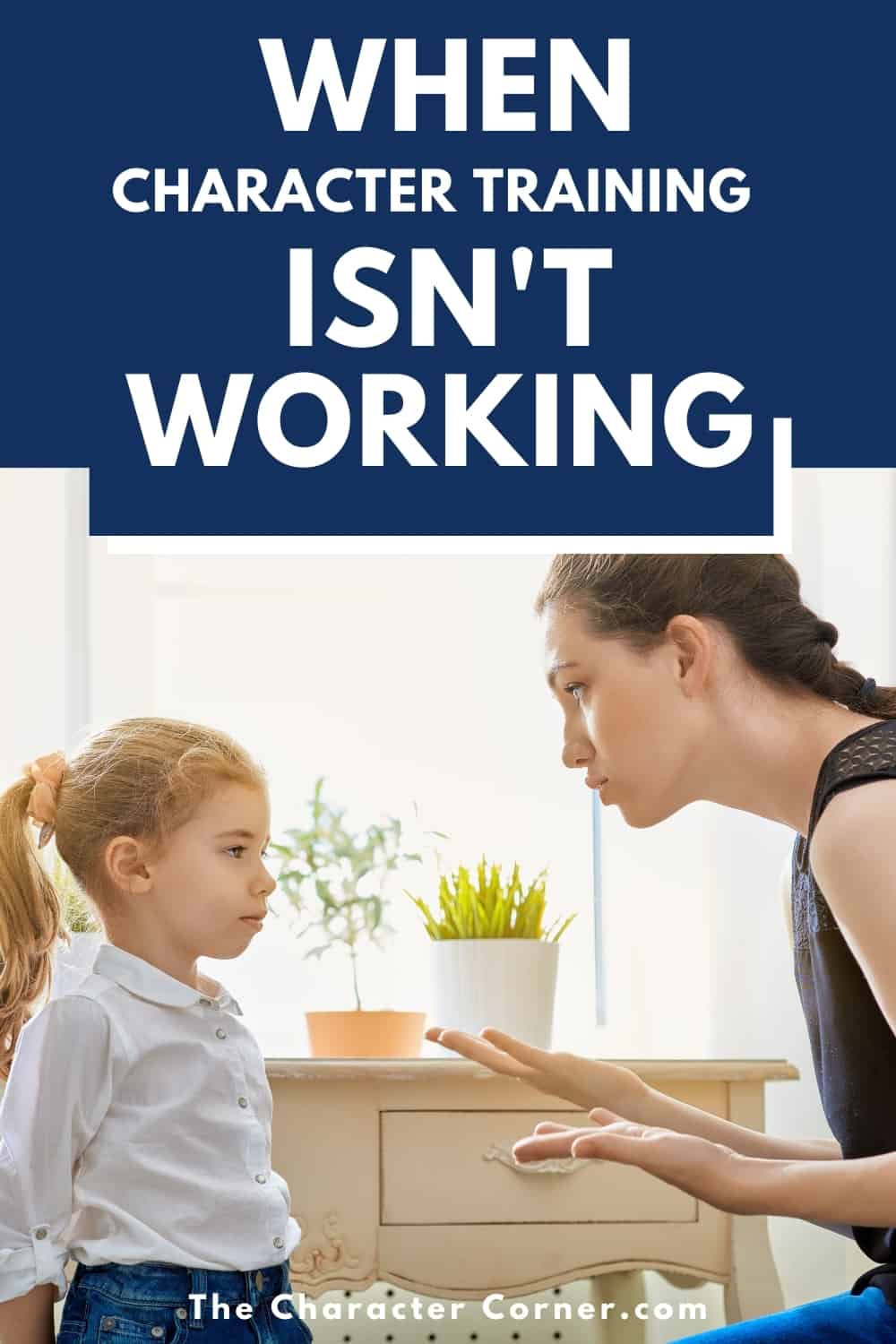 1. You can teach and train your children in godly character, but you can’t force them to choose it.

They daily make a choice to show good character or to give in to their sinful nature. Our job is to teach and train, as God told us to. Our goal, no matter how the kids respond, is to stay faithful in training so we can stand before God and honestly say we did our best.

The Bible tells us that God’s Word won’t return onto Him void. So if we stay faithful to plant God’s Word in the hearts and minds of our kids, His Word will do what it is supposed to do.

3. Character development and growth is a process that takes time.

Unlike a school subject like Algebra, which you only teach once, character training needs to be taught repeatedly day after day, and year after year. That’s why God gave us our kids for at least 18 years! We need that long to help them grow in and develop Godly character.

You may not see the results immediately, but you should still be faithful in character training when it’s not working, all the while trusting God with the results.

My discouragement often came because I expected that my kids would just learn the character trait. They would know how to apply it to their lives and then change in that area and have it down for life. Sometimes it was like I almost expected them to change overnight.

Then God reminded me of the fact that I still struggle with certain character issues. And that it often takes me quite a while to get victory in some of those areas. This made me realize that it’s not fair to expect my kids to overcome their struggles quickly simply because we’ve had a few character lessons about it. I need to be patient with them, as God is with me.

You will probably see spurts where character training seems to be working, mixed with days where it seems it is NOT working. You may even have long spurts where you just aren’t seeing near as much fruit as you would like to. Don’t give up! Keep reminding yourself that it is a process that takes time. It also takes years of reinforcement and encouragement.

Some of my kids were actually young adults when I really started to see the fruit of all the character training and actually felt like it had stuck.

When my oldest son was in college, he worked at UPS, loading trucks. I remember him telling me how shocked he was at the way many of the employees did their job. He told me how they didn’t care if they loaded things on the wrong truck, if it got smashed or damaged, or anything like that. They just wanted to get done.

He looked at me and said, “Mom, I could get my job done so much faster, but thanks to you, I just can’t do sloppy, lazy work like that. You trained me too well!” That made this mama happy — especially since there were still several of his younger siblings at home being trained.

What a great reminder and motivation for me to keep on addressing heart and character issues with God’s Word, and consistent character training.

Another one of my sons has worked at Walmart for several years. Over the years he has been offered different management positions several times, even though he was one of the younger employees. WHY? Because of his character! He worked hard, and they knew they could count on him, to be honest, and to do what needed to be done.

My youngest son got a job at Kroger in his senior year. The management there thanked me for teaching him to work. They thought he was the best worker they had ever seen. Why? Because unlike his peers that were close to him in age, he came to work when he was scheduled to, and he WORKED while he was there!

I’m not telling you this to brag, but to encourage you that the results DO come when you feel like your character training isn’t working!

Character Training in Your Homeschool

When my sons were younger and still at home, they weren’t ALWAYS as dependable as I might have liked them to be. In fact, there were many times I felt they really had some character issues to work on. I questioned if much of the character training was actually sinking in.

However, the seeds that had been planted in their hearts and minds through consistent character training. And it did eventually brought forth a fruitful harvest. I’m glad I stayed faithful in teaching them character, and didn’t give up when I got discouraged.

When it seems like Character Training Isn’t Working and you are getting discouraged, hang in there! Keep planting those seeds daily, and trust God to bring the harvest. 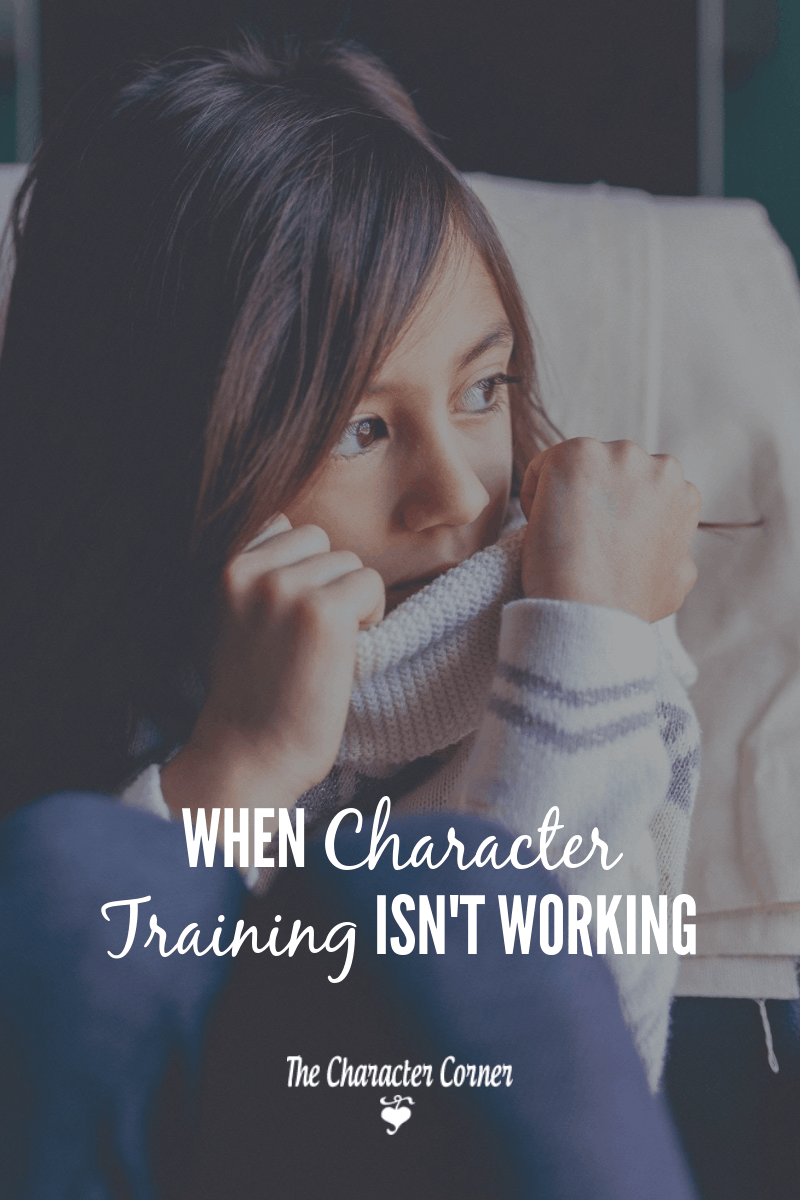