I could have halved the title of this post and it would have made for a worthwhile topic – “Why Parent Intentionally?”

But I’m going to go out on a limb and assume that since you’re here reading this post on a site dedicated to instilling Godly character in children that you’re probably a pretty intentional parent.

And well you should be. Very few things worth doing can ever be done well without intentionality. So let’s just say we’re agreed; things usually go best when you have a plan and you intentionally follow that plan.

What about the other half of the title? That would make for a good post as well – “Why Parent with Self-Control?”

Well, I’m also assuming that you think parenting with self-control is important. You might struggle with it, but at least you think it’s important.

Deep down, no one believes that exchanging quality time with their children for Facebook surf fests or binge-watching Netflix = responsible parenting.

Likewise, we also don’t believe that yelling and screaming at our child or threatening them with unreasonable punishments fall within the purview of “self-control”.

So why are we here? For more intentionality? More self-control?

Why You Need to Have Self-Control When Parenting Intentionally 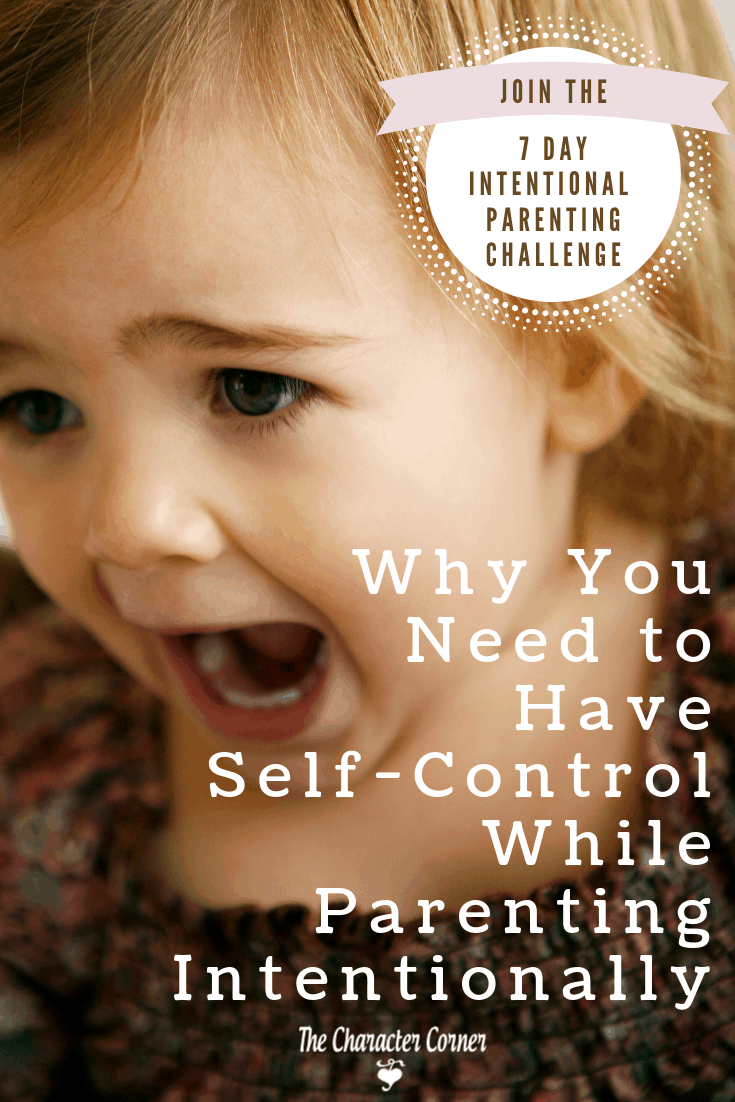 You might be asking yourself, “If I’m parenting intentionally, might that imply that I have self-control?” Not necessarily. Actually, it might imply that you have too much self-control.

Look, I totally believe in being intentional when it comes to raising children. After all, I created a character training program expressly designed to help parents do just that. Our mission statement? “Character Badges is committed to helping parents be more consistent, creative, and deliberate as they train up their children in the way they should go.”

I believe it’s important to parent intentionally, as opposed to just doing whatever and hoping for the best; but I’m sure you’ve heard the famous quote, “The best-laid plans of mice and men often go awry.”

In other words, despite our best intentions as parents, things don’t always go according to plan.

I learned this the hard way.

Again, there’s nothing wrong with planning. We were some of the most intentional parents I’ve ever known.

It’s just that you want to be sure you’ve made the right plans, and you have to remember that even the best plans are susceptible to being derailed by the unexpected.

Somehow, in all of the reading and planning, we did in preparing for parenthood, we missed both of these important lessons.

How to Have Self-Control When Parenting Intentionally

First, we were making the wrong plans.

I won’t go into all of it here, but suffice it to say we were listening to bad advice.

All of the books we were reading, the tape sets (back when that was a thing) we were listening to, and the seminars we were attending were telling us we had to “conquer” the will of our son. If we didn’t he’d end up a godless heathen (or at least they had us afraid he would).

There were all sorts of exercises these materials had us go through. One of my least favorites was the “Come to Me” exercise. This involved placing our son at the end of a hallway while I went to the other. I then reached out my hands with a smile on my face and said, “Come!”

We were told that most times our son would come, but occasionally he wouldn’t. My job was to work with him until he came every single time, no exceptions. There was just one problem.

Our son almost never came to us when we asked him to.

Instead, he would just fall into a heap of frustrated tears as soon as I said, “Come”.

The first time this happened I thought, “Oh, we were told about this. He’s rejecting my authority. We can’t have that.”

So I would go and take him by the hand and basically drag him to my end of the hallway. “There, that will teach him.”

In fact, we were almost never able to get him to come during those times. It was terribly distressing, both for me and him.

For me, because I was being told that he was “winning”. For him because all he saw was how frustrated I was becoming towards him.

Then one day a light came on. We’d made the wrong plans.

Oh sure, we were intentional. Putting your son through exercises to train him to come at will like some domesticated animal is the very definition of intentional, but our thinking was all wrong.

Our little son wasn’t actively looking for ways to subvert our authority. He was 2! He was an innocent child! Our expectations and our plans were misinformed.

As such, it was the very worst time to have “self-control”. Self-control is usually a very positive thing, but not when your plans are wrong.

In this case, we set aside our own misgivings as well as the counsel of others (not to mention the wisdom of scripture!) to pursue the work of “breaking” our son’s will.

Have you ever built a house? If you have I bet you were intentional about it, but anyone who’s built a house knows that stuff happens.

You hit a gas line digging the foundation. It rains during the 3 days the rough-in crew had open to frame you walls. The electrician can’t come for another 2 weeks which sets your drywall guy back, which sets the painter back etc., etc.

There comes a point as a parent in which you realize there’s only so much you can control.

It is good to be intentional. It is good to plan and to be purposeful in how we raise our children, but we should also remember to show some self-control when it comes to our plans.

We cannot force our children to acquire good character or to become Godly men and women. The course they follow in life is ultimately there’s to choose.

And while we should be intentional in how we attempt to lead them in the paths of righteousness, we must bear in mind that there’s only one Being who has ever had everything go according to His plans, and we’re not Him.

In these moments it’s our job, not to demand that our will be accomplished, but to be patient, to wait, and to listen for the will of God. That might mean pushing ahead despite all obstacles, or it might mean showing some self-control with what we think is best and scrapping our plans altogether.

Think of an area where you have been intentional, but may need to practice more self-control in your responses or expectations. Plan one way to improve in that area.

Don’t miss the other posts in the series! Sign up here and get the challenge delivered straight to your inbox each day!

A special thank you to today’s sponsor Character Badges!

Fun, Flexible, Effective Child Training – The Character Badges Base Set is our premier character training system for children ages 5–13. It was created to help parents inspire their children to build habits of good character. It was also designed to help us (as parents) be more consistent, creative and deliberate in raising our children.

Sean Allen is the creator of Character Badges and a proud father of seven. Sean is passionate about nurturing children to grow up with a desire to follow God and his ways. He loves to dream up creative and engaging ways to capture their imagination and to inspire them to give their very best effort in whatever God has set before them. Sean received his bachelor of fine arts from Avila University in 2013, is self-employed, and continually works on producing products that assist families in the important work of discipling their children. You can find him (and his lovely wife Caroline) blogging about the adventures, joys, and challenges of parenting at themodestmom.com.