One of our favorite ways to encourage character growth in our children was to use character charts to measure their progress.

This kept us watching for the efforts they were making, and it also reminded them to keep trying to show Godly character throughout the day.

Here are the 3 Best Character Charts To Encourage Growth 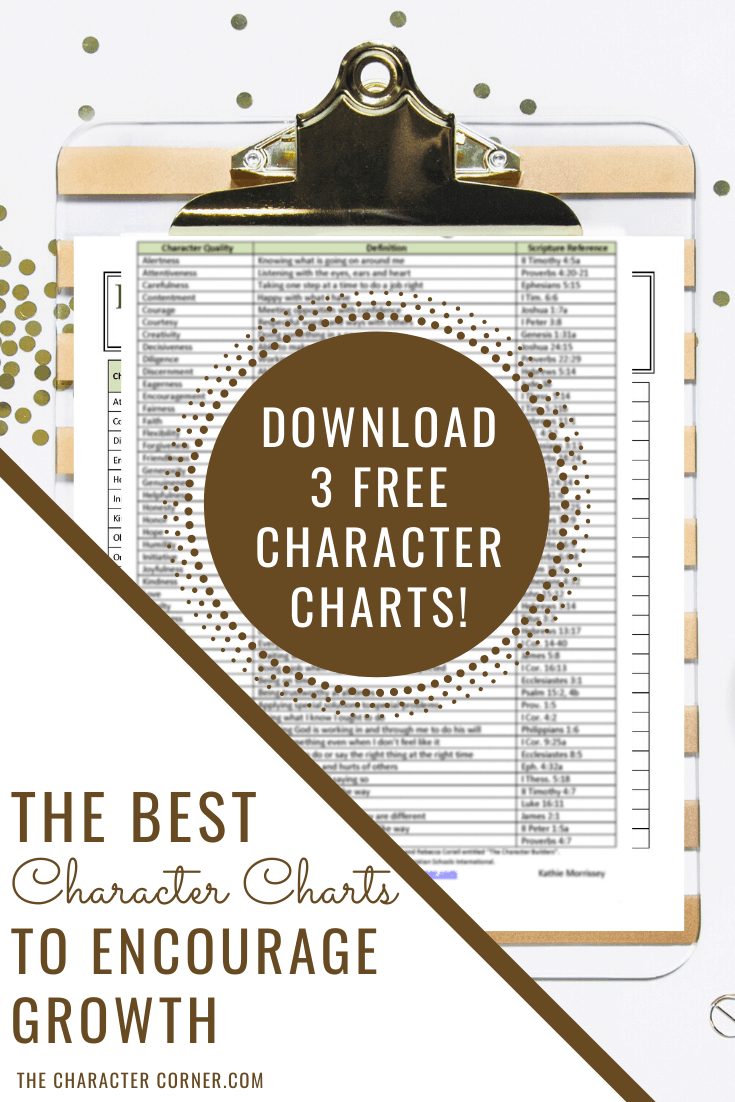 With most of the kids, when they got to be about 12,  they didn’t get as excited about it all as when they were young.   At that point, a younger sibling was usually old enough to understand and be added in.

Obviously, you don’t have to use the charts like we do. It will depend on how many kids you have, their ages, and how you want to use them with your family. I am just presenting this so you know how we have used them in our home.

We choose a time frame (1 – 2 weeks), and let the kids know when the character contest begins, and when it will end.

During that time we would watch for the kids to show good character, and give them a mark on the chart for the trait they displayed. (8 Ways To Recognize Good Character In Your Children)

For example, if one of them picked up toys without being told, we would give them a plus (tally mark) under their name for initiative on the Excellence in Character Chart.

When the contest time ended, we had a character celebration.

Here’s how we encouraged character, just to give you an idea:

1. We chose a character trait out of the bowl, and the child with the most marks for that trait was the winner.

We gave the winner one of our character ribbons and a prize from the prize bag. (toys from the Dollar Store, packs of gum, candy bars)  We all clapped and got excited for the winner.

2. After the winner announcement was done, we looked at the Excellence chart to see who could fill in any squares on their growth chart.

For every five marks they got for any trait, they got to fit in a square on their Growth in Character Chart for that trait.  This enabled us to recognize them for the progress they had made during the week, even though they may not have been the winner.

3. After this time of recognizing the progress that the kids had made, we had a special treat like ice cream or cookies.

Even though the kids started to lose their excitement about winning as they got a bit older, we still wanted them to keep a focus on character, and be involved. Sometimes I would pair the older ones up with the younger ones, and they’d encourage their teammate during the contest.

Another thing I did was have the teens help me watch for good character in the younger ones.

I started this when I noticed one of the teens was VERY good at seeing the bad in his siblings. Often he could be heard saying things like, “Awww – you’re not obeying!”, or “You’re having a bad attitude!”.

I wanted to turn the negativity into positive comments instead.

So I told the teen that I needed his help with watching for good character in the kids and asked him to give them a tally mark on the chart whenever he saw them showing good character.

This turned things around for him and the siblings!

He started to notice the good, and they were much more encouraged to hear him say, “Wow! You just showed initiative (or some other trait)! I’m going to give you a plus on the character chart.”

To me, it was very exciting. I love hearing my older kids encouraging their younger siblings to do what is right! 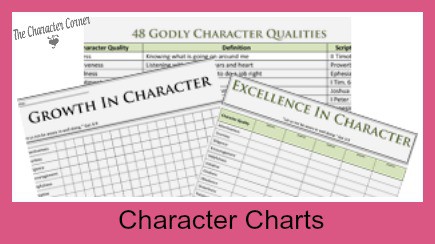 1. It kept my husband and I focused on positive behavior.

It is so easy to see the wrong things our kids do and get after them for those things constantly.  Yet, we forget to look for the right behavior and good character and praise them for it.

Using these charts caused me to be on the lookout for any signs of effort to practice good character.

As a result, I was much aware when they did the right things, and I encouraged them more often about the right behavior.

2. It kept us focused on what was important.

Sometimes we forget that Godly character is more important than physical accomplishments (like in sports), musical abilities, or getting good grades.

As a result, we convey the wrong priorities to our kids and fail to teach them what really matters.

My husband and I felt very strongly that building Godly character in our kids intentionally should be one of our top priorities and goals.

We wanted the kids to know that Godly character pleased the Lord, and was important.

Using the charts helped us to remember to look for good character in our kids, and to praise them when they showed it, letting them know we were pleased with their behavior and so was God.

3. It kept the idea of Godly character before the kids all through the day.

All it took was us “catching” one child showing good character, and giving them a mark on their chart. Other kids would then start thinking about how they could show good character too.

Choosing to do things that show good character becomes a habit over time, and then develops into character.

Perhaps some of you are wondering, “Well, aren’t the kids doing it for the wrong reason?  They’re choosing to go and do something “right” so they can get a mark on their chart, and get recognition from Mom or Dad.”

1. They MAY be doing it for the wrong reason.

However, they are purposefully choosing to do something that is right. In reality that’s what character is. Doing what’s right whether we feel like it or not, because it’s right.

2. God uses rewards to motivate us to do right.

In the Bible, we are promised that we can get stars in our crowns. So why not encourage our kids to do what pleases the Lord by using small rewards, such as verbal praise, marks on a chart, or little prizes in a character celebration.

GET A FREE DOWNLOAD of the Excellence and Growth in Character Charts, AND a copy of the 48 Godly Character Traits
(Visited 11,583 times, 193 visits today)