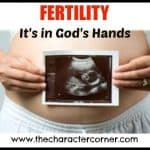 So, back to the nitty gritty details, we were taking our 3-6 month break and trying to save money for further treatment, and really just beginning to relax and enjoy the break from the emotional pressure of it all. At some point in this time, my husband began mentioning things more and more often about being anxious for me to get pregnant, etc. He had been very supportive throughout all of this, but it was usually me who was the one talking about it, not him! He came to me one morning and said he had just had a “random thought” and didn’t know if it was just that, or maybe God trying to tell him something, but that he felt like we were going to get pregnant soon, and we were either going to find out around Thanksgiving or Christmas time. He also had a dream about me being pregnant. Take that for whatever it’s worth – I tried not to hope too much, but did think it was odd that Rob was having all these thoughts and dreaming about it too!

Somewhere within probably the second or third month of our break from treatment, I began to experience some pretty extreme exhaustion, and I was late on my cycle. I ignored all this because it had all happened before, and I was so very tired of getting my hopes up and taking pregnancy tests, only to find out that once again, it was nothing, just my body acting up again.

Fast forward a few weeks to December 14 2013, a Sunday. I woke up that day feeling a little nauseated, but once again, I blamed it on my body just doing weird things, because as I said, I had been through things like this before, and it was always a disappointing NOTHING!

However, this time the symptoms didn’t go away. My exhaustion was increasing, the nausea lasted for an entire week, and I was starting to get worried. Mind you, I was worried because I thought something was wrong – I absolutely did not suspect pregnancy. On Friday, December 19, I was so discouraged and scared about all these weird symptoms, I made an appointment with my family doctor, thinking that maybe we should do some blood work and see what in the world was wrong with me. After hearing me out on my history of fertility issues and my current symptoms, my doctor said he would be happy to order some blood work for me, but he also kindly suggested that I take a pregnancy test. I said I would, even though I really did not think anything was going to come of it.

The next morning, December 20, 2013, I got up to take the test, and within 30 seconds – it was a test that said to wait for 3 minutes before looking at the results, but of course I looked at it immediately – I saw 2 lines appear in the one testing window, and then a faint but very definite plus sign in the other. After I picked my jaw up off the floor, I immediately ran to the bedroom where Rob was still in bed, and whispered frantically – “Come here! You have to look at this! I think I’m PREGNANT!” He came in and agreed that the test appeared to be quite clear. We hugged, we cried, we laughed and prayed and cried and laughed some more. 🙂 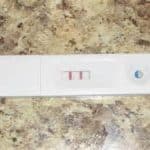 Nonetheless, this was so very hard for us to believe, we went out and bought another pregnancy test – a digital one, this time, because I wanted one that clearly spelled out “PREGNANT” for me – which I took the next morning. Once again, the instructions said that the results should appear within 3 minutes, but just like the other test the day before, the results were almost IMMEDIATE, and said “pregnant” very clearly. Now we knew it was true. 🙂 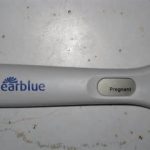 We were able to share our Christmas miracle news with our immediate family members that week as we saw each of them throughout the Christmas holiday. Lots of tears and thanks to God was given as the announcement was made to each family. 🙂

We called the specialist immediately, and had our first appointment on December 26 2013, at which point we had an ultrasound which allowed us to see our baby and even see his heartbeat, which was quite truly the most amazing thing I have ever seen. The doctor also said that my blood work results were absolutely amazing as they were right on target, and questioned me as to whether or not we had tried something different to make all this happen, which just made me want to laugh with complete joy and awe all over again, because I know the answer to that question has nothing to do with Rob & I, and what we may or may not have done differently. Praise God for a miracle that only He could have done.

And here we are today, continuing to praise and thank God not only for this baby, but for His beautiful plans. I’ll never know why He allowed us to go through those 2 years of difficulty, and quite truthfully, I don’t NEED to know why. God has proven His faithfulness and love to us over and over and over again, even before we saw that positive pregnancy test, and there is absolutely no doubt in my mind as to His perfect faithfulness and plans for our lives, always.

To God be all the glory and praise forever.

(That’s the end of Ruth’s beautiful, candid testimony of God’s grace through those difficult years of waiting. In the next post, The Pain of Infertility 4, I will share some thoughts from MY perspective as a mom, as she went through this.)